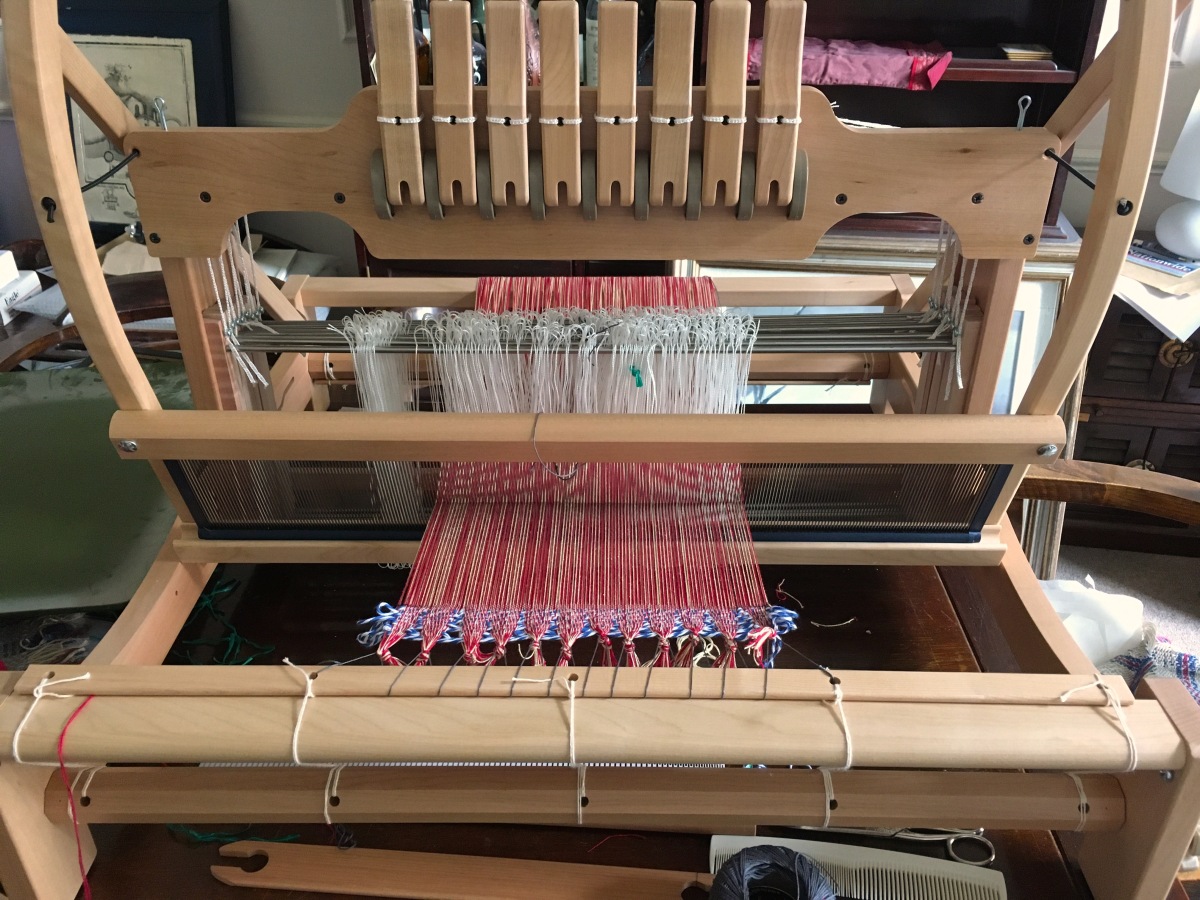 And so it was that after admitting defeat (wanted to do double weave overshot on my rigid heddle loom – sadly, it can’t be pushed to that, or at least I couldn’t figure out how to accommodate it with three heddles without any pickup sticks or additional threaded heddles), I plumped for an Ashford 8 Shaft, 60cm/24″ Table loom – I’ll call her Penelope, hoping I will actually end up not unweaving too much!

Below a collection of scattered tips – coming from the Rigid Heddle Loom I had some pre-conceptions which turned out to be dead wrong. Obvious ex post, nevertheless I thought I’d collect them here in case someone else finds them before making the same mistakes I did!

It may need assembly, but it does not need finish. So if you had to wax your rigid heddle loom (as is the case with Ashford), you can save the leftover wax for other items. Assembly of a table loom will require a few hours – worth bearing this in mind when planning during the anxious wait for your loom to arrive. In the case of my Ashford Table Loom, I took a good half an hour to make sure I had all the pieces/screws/bolts all checked and grouped together. It took me the best part of two solid evenings to put it together. You will also need a candle (you will scrape the wood screws over it t ease screwing in), a good quality Pozi screwdriver (I swear by Stanely Fatmax), and a hammer. The assembly enininstructions could not be clearer, just take your time – by the end of it I was quite intimate with my new loom!

The rigid heddle loom frame sits flat on any surface. The frame of the Table loom instead sits on feet. This is something consider if (like me) you are not planning on a stand. So first of all the surface that will host it will have to be deep enough that the feet don’t “fall over”. An Ashford Table Loom is 74cm/29″ deep, regardless of width, while many desks and kitchen tables are not that deep, certainly mine aren’t, so what to do? My solution was to buy two 80cm/32″ lease stick, and use them lengthwise on each side of my loom. So no overhang there. I put some rubber disks underneath the lease sticks so that they won’t slide under pressure when the loom is in use. You will need a chair of adequate height.

Very different setts are obtained with the same reed.

With Rigid Heddle Looms, reed, heddle and beater are one and the same. So for a denser warp you must use a denser rigid heddle, and you have to use different heddles for different size yarns. This is because the heddle also works as a beater, and so it rubs against the tensioned warped thread constantly. With a Table loom instead the heddles (which also can be rigid, e.g. floor loom typically have metal heddles) are separate from the reed. You will pass a single warp thread through the eye of a single heddle; heddles hang from a shaft, and so pulling the shafts up will create the sheds. The sett however depends on how many threads you sley in each of the reeds hole. To know how to obtain a given sett you can refer to a reed substitution chart. There are limits, though, so tipycally a balanced number of ends in each slot won’t leave a “trace” in the weaving, and so you will probably end up with a colleaction of reeds for your table loom too (I know I will!)

Seriously, no comparison – so if you can double weave on a rigid heddle loom, I could imagine you can triple weave on a table loom! Testing the claim is firmly on the cards.

This is particularly true for the Ashford – if you look at it form the side, it wraps around the frame making a Z shape around the front beam, and a mirror Z at the back beam, see below for a picture from Ashford’s assembly instructions. If you won’t follow this, the gears will slip and won’t hold tension (ask me how I know…)

The Ashford Table Loom currently does not come with a raddle, which you have to buy separately. Because you typically have to indirect warp (but you could also hybrid warp warp!) you have to spread it on the beam in the same width as it will be through the reed, so that when you wind the warp you end up with an even, lovely cilinder that will keep tension throughout the weave. To accomplish this you can either buy or make a raddle yourself; or you can use an existing reed. You will position it exactly as you would a raddle, and you “rough sley” it with the ends per inch of your sett – where “rough” stands for the fact that you dont’ have to be as precise as for when you sley the reed. The reed will sit at the back of your chain (you don’t want to upset the cross), as would the raddle. Once the warp is spready through the reed, you start packing the warp on the beam, leaving enough warp to reach the front of the loom. Then you remove the reed, and start sleying the heddles. With a table loom it is easy to remove the reed from the beater (you need to do so to warp back to front anyway) and use it as a warping aid. Nice explanation with clear pictures here and here.

How? Take a string of piece of pearl cotton and loop it around the bottom shaft bar, keeping the two sides of the loop of equal length. Tie both ends in a knot, leave about 1cm, then tie another knot (now you’ve made a heddle eye), then tie a knot at the upper bar. Not ideal, but better than re-sleying everything!

Having extra heddles available might be useful expecially for the novice like me, so that you avoid having to make an extra heddle (or two) when discovering threading mistakes. So you can count how many extre heddles you have per shaft, and stick one or more in at each repetition.

You can weave inkle bands on your table loom.

An inkle look is a 2 shaftt loom, and band weaving may involve a lot of pickup. With a 4-and-above shaft loom you can of course reduce the pickup. Use a straigh threading with the reed off the loom, and beat with a belt shuttle. A free guide to inkle weaving is avaiable from Handwoven Magazine, a 1941 pamphlet by Mary Atwater is available here, a rather clear beginners guide is here, and some wonderful Andean patterns written specifically for the 4S Table loom are here and here. But I digress!

I used to knit as a girl, then hanged the needles for two/three decades, and now I’m back, and loving it! The photo is my version of Linda Marveng's Aki, the first proper project after "being born again". After getting back into knitting, weaving has also become my passion (with a little sewing to turn my handweaving into garments). View all posts by lovestoswatch

some of my recent finished objects